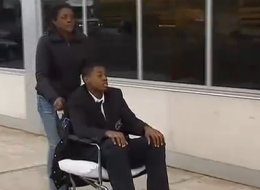 Pennsylvania teenager Darrin Manning started his day excited to play in a basketball game. It ended with the 16-year-old under arrest and in excruciating pain in a horrific case of alleged police brutality, now under investigation by Internal Affairs.

Philly.com reported the Jan. 7 ordeal, when Manning and the other members of his high school basketball team got off a bus to go face their rivals.

As the students were walking into the gym to play their game, Manning said that one of his teammates may have made a snide remark to Officer Thomas Purcell with thePhiladelphia Police Department, who was on patrol in the area.

The officer began walking towards the group, and the kids sprinted away. Manning told Philly.com he started running too, but then stopped.

“I didn’t do anything wrong,” Manning told the publication.

According to a police report, Purcell stopped Thomas after he said he saw a group of black males running away with ski masks. The students said they were wearing scarves, not ski masks.

Soon after being stopped, Manning — who has no history of discipline problems and is a straight-A student — was arrested for aggravated assault, resisting arrest, and reckless endangerment, My Fox Philly first reported.

According to the report, Manning allegedly fought with the officer, hitting him three times and ripping off his radio. Despite this, the report says “no injuries sustained to police.”

Manning said a female officer came to pat him down as he was being arrested. Manning claims he was sexually assaulted and brutalized by that officer, who has not been named.

Manning suffered a ruptured testicle and screamed in pain. The following day, he underwent emergency surgery and is now in a wheelchair as he recovers.

His mother, Ikea Coney, said the injury may prevent her son from fathering children.

“I blame myself,” Coney said. “I taught my son to respect cops, not to fear them. Maybe if he was afraid, he would have run like the other boys and he would have been okay.”

As part of the Internal Affairs investigation, police said they wanted to speak to Manning. The teen’s attorney, Lewis Small, said that is out of the question.

“I’m not going to allow my client to sit down and give a written statement,” Small said. “That’s in effect malpractice by any attorney while criminal charges are outstanding.”

The family is fighting to get rid of Manning’s criminal charges before they take further action regarding the alleged brutality.

Police are declining to comment on the incident while the investigation continues.

According to records from Internal Affairs obtained by Philly.com, Officer Purcell has had complaints in the past regarding false arrests. In a 2008 and 2009 case, he was cleared of any wrongdoing.

Manning spent eight hours in jail before being released. When basketball coach Dan Jackson went to the station to check on his player, he asked the cops why they went to such extremes.

“If this was St. Joe’s Prep, would the same measures have been taken that you took on my boys?” Jackson asked.

He said the officers in the station ignored his question.