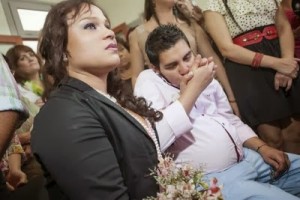 The first baby to be born to transgender parents in Argentina was delivered via C-section in the province of Entre Ríos.

Alexis was born a woman, but lives as a man and Karen was born a man, but lives as a woman. Because of Argentina’s Gender Identity Law passed in May of 2012, the couple have both been able to legally change their genders without gender reassignment surgery, which meant that when they got pregnant via natural means, it was the man, Alexis, who carried the baby.

The baby was due on December 22 via scheduled C-section, but couldn’t wait. Alexis started having contractions the weekend before the scheduled birth, and the  baby was born “early” weighing 9.37 pounds at Hospital Fermín Salaberry in Victoriain.

They officially tied the knot in November.