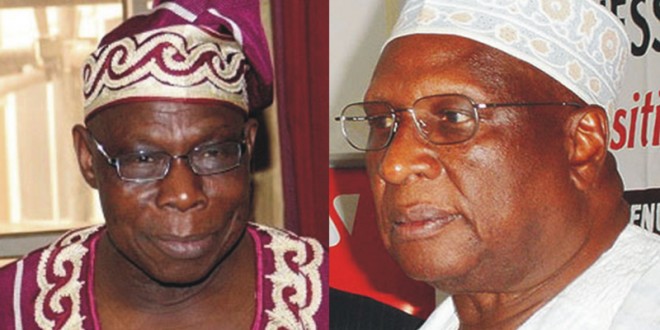 Former President Olusegun Obasanjo on Sunday maintained that the National Chairman of the Peoples Democratic Party, PDP, Alhaji Bamanga Tukur should address the issues raised in his letter saying pleas that he should reconsider his withdrawal from the party were misplaced.

Obasanjo spoke on the backdrop of the PDP national chairman’s reply to his letter pleading with him to remain in the party as his “fatherly disposition” was an asset the party could use. Information Nigeria also reports that President Goodluck Jonathan had allegedly reached out to Obasanjo via a telephone conversation urging him to reconsider the withdrawal of his activities from the party.

But the former president remained adamant on Sunday noting that he had raised issues and conditions for him to involve himself in the affairs of the party again, stressing that until they were addressed, he would not reconsider his position.
Among the conditions raised by Obasanjo in his fiery letter to Tukur dated January 7 and copied to Jonathan, was that a chieftain of the party from Ogun State, Prince Buruji Kashamu should be removed from his place of prominence in the affairs of the party. Obasanjo had said that he would not subject himself to the leadership of Kashamu, who he described as a “habitual criminal” and fugitive from justice in the United States.

The former president, who spoke through his media aide, Mr. Tunde Oladunjoye said: “[ex]-President Obasanjo wrote a letter and in that letter there were conditions, there were issues he raised and he is a member and card carrying member of PDP but he is not going to participate in activities of the party until the issues he raised are addressed.

“The letter said until certain issues are addressed. The letter is very clear, ‘I am with you, I remain a member, but I will not participate in your activities until you address the issues’. The question is has he addressed the issues?” Oladunjoye asked rhetorically.