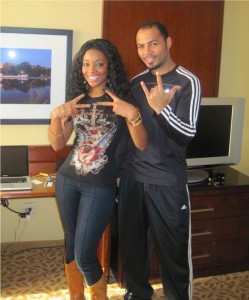 You have been married for a while, how have you been able to hold your home together?

I must give it to my wife. She’s a triple woman. She’s not like an ordinary woman out there. When some people asked my wife how she copes with an actor husband, I told her to tell them that is why she is a triple woman. The first thing I told her was that, if every woman that says I cannot live with your husband, will actors get married? Will actors ever marry or have a family? I told her it is because you are more than just a woman. Sometimes, she says Ramsey what kind of kissing is that? Na all my market you don go sell finish for camera. One woman came in from Benin to meet my wife that she was the once I married. This woman stayed in our house for three days until I get the police to come and drive her away. It was such a nasty experience that makes me laugh every time.

On his relationship with Genevieve Nnaji:

It is quite funny. I think everybody just tried to marry Genevieve and I before we actually got close. I didn’t shoot much movies with Genevieve like I did with other actresses. I think I shot five movies with her. I have never had such feeling for her. We were just colleagues who wanted you people to feel the way you are feeling now. It tells you that we played our roles very well.

Why were you dropped as a Glo ambassador?

I don’t know but I think they told us that they switched to musicians. I don’t have to bother myself about why or who dropped me.