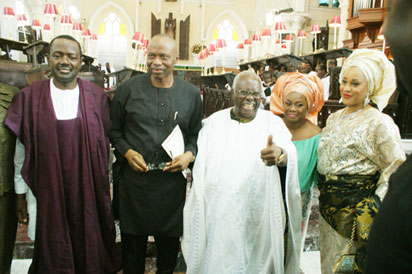 A former deputy national chairman of the Peoples Democratic Party, PDP, Chief Olabode George has said that former chairman of the Economic and Financial Crimes Commission, EFCC, Nuhu Ribadu, once acknowledged that his trial and conviction were politically motivated.

According to George, the ultimate plan was to get him out of the politics of the Southwest and the country in general.

The PDP chieftain, who was convicted by a Lagos High Court for ‘contract splitting’, made this known shortly after a thanksgiving church service to celebrate the Supreme Court judgment that nullified his conviction by the lower courts.

He insisted that his tenure as the chairman of the board of the Nigerian Ports Authority, NPA, were guided by the long standing administrative circular which is still in use today by the authority.

According to him, the immediate past chairman of the anti-graft commission, Mrs. Farida Waziri, however, tried him in court, in spite of the fact that there was an advice against his arraignment in court by a legal officer of the commission.

His words: “Even Nuhu Ribadu in his heyday at the EFCC boldly stated that whatever problem was at the NPA was a systemic issue and not of fraud.

“He advised that those who had political issues with Bode George should go and sort it out with him”.