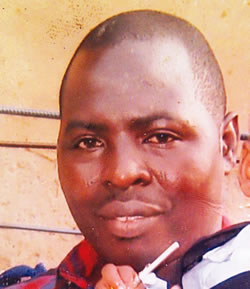 An employee of Supersports, Kunle Fajugbabe, has been killed by armed robbers in the Bariga area of Lagos State.

It was learnt that the deceased had gone to withdraw money from an Automated Teller Machine at a Wema Bank branch located on Jagunmolu Street around 11.30pm when he was attacked by the robbers.

It was learnt that the 38-year-old indigene of Ekiti State was shot.

The assailants were said to have also snatched Kunle’s Mazda salon car and fled, leaving him in a pool of blood.

It was learnt that policemen attached to the Bariga Division, who were on night patrol, saw Kunle’s body and took him to the station before his family members were contacted.

The police were said to have taken him to the Gbagada General Hospital where he died two hours later.

Visit to the family home of the deceased at a one-room apartment on Ososa Street, Bariga, on Saturday, revealed that he was survived by a wife and three children.

Kunle’s wife, who identified herself only as Mrs. Fajugbabe, told our correspondent that her husband’s car was recovered three days later in the Ogudu area of the state.

“My husband was a technician at Supersports, and as you can see, life has not been easy. I have three children to feed, my oldest child is just eight years old while the youngest is a baby.

“I am presently unemployed and I would be happy if anyone could help me in securing a job so that I can take care of these children.”

It was learnt that the deceased had been buried.