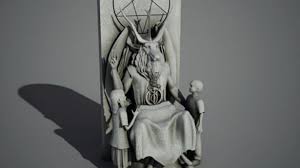 A satanic group unveiled designs Monday for a 7-foot-tall statue of Satan it wants to put at the Oklahoma state Capitol, where a Ten Commandments monument was placed in 2012.

The New York-based Satanic Temple formally submitted its application to a panel that oversees the Capitol grounds, including an artist’s rendering that depicts Satan as Baphomet, a goat-headed figure with horns, wings and a long beard that’s often used as a symbol of the occult. In the rendering, Satan is sitting in a pentagram-adorned throne with smiling children next to him.

“The monument has been designed to reflect the views of Satanists in Oklahoma City and beyond,” temple spokesman Lucien Greaves said in a statement. “The statue will also have a functional purpose as a chair where people of all ages may sit on the lap of Satan for inspiration and contemplation.”

The Satanic Temple maintains that the Oklahoma Legislature’s decision to authorize a privately funded Ten Commandments monument at the Capitol opened the door for its statue. The Ten Commandments monument was placed on the north steps of the building in 2012, and the Oklahoma chapter of the American Civil Liberties Union has sued to have it removed.

Similar requests for monuments have been made by a Hindu leader in Nevada, an animal rights group and the satirical Church of the Flying Spaghetti Monster.

In response, the Oklahoma Capitol Preservation Commission recently placed a moratorium on considering any new requests.

“Anybody can still make their request, but we’ll hold off on considering them until the lawsuit is adjudicated,” commission Chairman Trait Thompson said.

The push by the Satanic Temple has rankled elected leaders in this conservative state known as the buckle of the Bible Belt, who say such a proposal would never be approved by the commission.

“I think you’ve got to remember where you are. This is Oklahoma, the middle of the heartland,” said Rep. Don Armes, R-Faxon. “I think we need to be tolerant of people who think different than us, but this is Oklahoma, and that’s not going to fly here.”

While Greaves acknowledges the Satanic Temple’s effort is in part to highlight what it says is hypocrisy of state leaders in Oklahoma, he says the group is serious about having a monument placed there.

The group already has raised nearly half of the $20,000 it says it needs to build the monument.

“We plan on moving forward one way or another,” Greaves said.

Another Oklahoma legislator, Rep. Earl Sears, called the group’s effort “an insult to the good people of the state.”

“I do not see Satanism as a religion, and they have no place at the state Capitol,” said Sears, R-Bartlesville.

On its website, the Satanic Temple explains that it “seeks to separate Religion from Superstition by acknowledging religious belief as a metaphorical framework with which we construct a narrative context for our goals and works.

“Satan stands as the ultimate icon for the selfless revolt against tyranny, free & rational inquiry, and the responsible pursuit of happiness,” the website says.