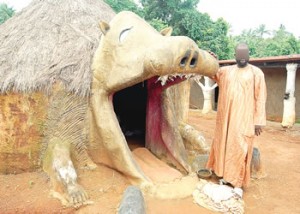 This is a must read for all to learn lessons of life and avoid becoming a victim. It is for real. Merely looking at the images within a shrine discovered in Ife, Osun State, is enough to make many become lily-livered.

While it was initially thought to be a haven for rituals, arrested suspect has confessed to have employed tricks to hoodwink his victims.

THE Osun State Police Command has made a startling discovery of a shrine at Mosarajo village, along Ifewara road, via Ile-Ife, Osun State, built purposely to swindle undetecting people who are seeking spiritual help from traditional doctors.

For those who are not strong hearted, a visit to the shrine would send shivers down their spine while they are likely to have nightmares over and over again because of the scary images and fetish objects found within the premises. Information revealed that the hideout, built deep into the bush, by one Aliyu Mutairu, a.k.a. Abu Ragbaja an indigene of Inisa town, Osun State, was discovered when a part of his fence collapsed and some of the images were sighted by those who passed by the fenced structure.

The Assistant Commissioner of Police Mohammed Jimoh reportedly led detectives to Lamecco area, Ilobu road where one Aliyu Mutairu, suspected to be the owner of the shrine was arrested.

After the discovery and arrest of the owner, police detectives, led by the Assistant Commissioner of Police, and joined by Assistant Commissioner in charge of Ife area Command, Yinka Abdulkadir Jimoh; Divisional Police Officers, ‘A’ and ‘C’ Divisions, Ile-Ife, police image maker, Folasade Odoro and other officers visited the shrine some weeks ago.

The Commissioner of Police Dorothy Gimba was also said to have visited the place to see things herself. Discovered were six tombs with different names such as Iya Egungun Agan, Abore Akoko, Apena Oodua, Awise Ifa, Apena Orisa and Oluwo Agba written on them. There were also different shrines with names such as Sango (Yoruba’s god of thunder), Yemoja, Esu Laalu, Allale, Igba Irunmale and Egungun.

Huts containing fearful statues, a structure designed with a fearful image of a lion, a coffin with a live python in it and mermaid statue were among other things found at the shrine. Also recovered from the shrine were 26 bundles and 12 pieces of fake US 100 dollar notes, a mortar containing black soap, a beaded crown and a walking stick.

Hundreds of residents of the village and adjoining ones reportedly stormed the shrine to destroy it, surprised that such a place had been within their community undiscovered. It was learnt that the secret of the existence of the shrine was blown open when a part of the fence erected round it collapsed, exposing some of the bizarre statues within the compound.

When he was arrested, the suspect, who was said to be married to three wives and recently brought a fourth lover to a settlement close to the shrine, denied engaging in rituals but confessed that he had been obtaining money under false pretence from his victims.

He also revealed that a palace chief was one of his group members. He revealed that the mermaid statue which was sculptured by a deep well had ground pipes connected to it which supplies water. One of his syndicate members would blow a hose passed through it. This would make water to drip from the hands of the mermaid to further hoodwink his clients.

In an interview, the suspect spoke on his criminal exploits in connivance with other members of his gang. How he started I was in Lagos selling herbs when a man called SOJ from Ekiti State who noticed that people used to patronise me told me that I could make much money from my customers by exploiting their needs. SOJ took me to other fraudsters in Lagos State in 2003 and I was introduced to this business.

“I rented a room in Iju-Ishaga area of Lagos State beside Guru Maharaj Ji’s place of worship. However, others members used to give me little from whatever was made and I was not happy about it. I left the group to establish my own shrine in Ife in January this year when I was outsmarted by my group in Lagos.

“The experience I gained from them is what I am using to dupe people. Six of us are into the business of obtaining money from people under false pretence. They are ‘Iya Gbogbo’; Kabiru who stays in Ijebu-Ode, Ogun State; Chief Aro, a palace chief who has my type of shrine; Rasak who stays in Ijebu-Ode, Ifayemi and Fakeye. They used to bring clients who are seeking spiritual assistance to me and I would stay in the lion house pretending to be an elderly man. Chief Aro and I were on a big job when I was arrested.

“Though I have been arrested by the police, the chief and one ‘Iya Gbogbo’ are still on the job. I don’t know the name of our victim but we call her ‘Iya’. She is from Abuja and is seeking for a posting in a government office in Abuja. I have collected N400,000 only from her”.

On how he built the shrine I brought Hausa men from Kaduna to build the huts and the underground. A man called Nautica who is a film producer did the sculpture works. He stays in Abeokuta. I paid him about N800, 000 for the job, including the tombs. I paid the mallams N300,000. I also hired about 10 men from Sabo for the construction.

I paid N1,500 per day and completed the place in four months, working non-stop. I came from Lagos with N4million for the construction and also graded the road to the place. I am yet to recover my money fully. On the fake dollars I used to keep them in the coffin beside the live snake.

An Igbo man brought them from Alaba in Lagos and sold to me at the rate of N25,000 per pack containing 100 pieces. I don’t know his real name but he is popularly called Dollars. He changes his mobile lines always. Whenever he brought the fake dollars, he would call that he was at Lagere.

A few minutes after, he would move from that spot to another until I would get him. He was always cautious to prevent being arrested. How he went undetected I am so skilled that my job was always perfect without mistake. Victims were usually brought to me by others in the business. I can even take the police to other shrines located on Ondo road.

I used to prescribe herbs to those looking for children before I started the fraud business, and God used to answer their prayers. Same goes for those looking for partners. My victims could not have detected that I was deceiving them because the rooms I use are always dark so they cannot identify me.

My mode of dressing also makes identification difficult. I can get up to four or five victims in a week. I always stay in the lion house. Classes of victims They are those looking for money, husbands, wives or children. Others are those who are sick or want to take the positions of their colleagues. For those looking for money, I start to extort them little by little, starting from N100,000.

I would tell them that I used the money for ritual to the python so that it would bring money. If I see that the client is able to raise the money in time, I would trick him into bringing more. After about three times, I would demand for a million naira for further sacrifice. If I see that he is unable to raise that in time, I would call and tell him that my child had died or was sick; or even tell him that I had been befallen with a great sickness due to the sacrifice I carried out and that the python still needs more sacrifice of blood.

That will scare such client from coming back to ask for all the money he had initially brought. For others, when they bring money, I would keep it beside the snake in the coffin. I would, in exchange, keep some fake dollars beside the python in the coffin and would then tell my client that since the snake has brought some money, he would need to buy between seven and nine cows for sacrifice.

After he must have brought the cows or pay for them in cash, I would then say that the snake would release the money after the sacrifice. I would repeat the same lies that would scare such a person off used to share the proceeds with members of the syndicate.

Reacting to the discovery, the state Police Public Relations Officer, Folasade Odoro, a Deputy Superintendent of Police, said that the Commissioner of Police Dorothy Gimba has tasked the State Criminal Investigation Department to carry out a diligent investigation to unravel those behind the running of the shrine.

The Commissioner of Police warns youths who are desperate to make money to desist from criminal acts and engage in lawful means of making such money or else, they would face the full wrath of the law, the PPRO said. She added that CP Gimba cautioned members of the public who are desperate for money to desist from pursuing destructive ambitions so as not to continually fall victims of fraudsters.