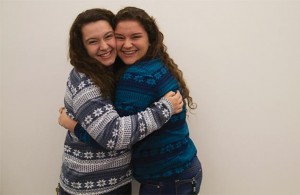 Most freshmen come to college expecting to find life-long friends. Mikayla Stern-Ellis and Emily Nappi found a sister. The two freshmen discovered during winter break that they are half-sisters because of a shared sperm donor.

Stern-Ellis and Nappi met on Facebook during the roommate-search process.

Though Nappi had already found a roommate, the two kept in touch by messaging on Facebook. They eventually realized that not only did they both have sperm donor fathers, but also that they both had a Colombian sperm donor.

The two joked to each other and their friends about the possibility that they could be half-sisters but never thought that it might be true.

Mikayla Stern-Ellis’ parents, Heidi and Debra Stern-Ellis, said in a phone interview that all of the girls’ commonalities made them wonder if they shared the same donor.

“When she told us that they had talked a little bit and knew they both had a Colombian donor, Heidi and I said to ourselves, you know, we remember going through the donor list, and there [were] probably about 1,000 donors,” Debra Stern-Ellis said. “We don’t really remember any [other] Colombian donors, so when Mikayla came home for winter break, we were sitting on the couch and looking at Emily’s picture and her picture, and I said to her, ‘You should text her and ask her for the donor number.’”

Mikayla Stern-Ellis sent Nappi a text message asking for her donor number to identify whether or not they shared genetic material. When they found out they shared the same donor, both girls said they were mind-blown and that their families were in awe.

“This is just one of the many amazing gifts she’s gotten from going to Tulane already,” Heidi Stern-Ellis said.

The half-sisters have since identified many commonalities that they attribute to their shared genes. Both are performers in Tulane’s upcoming production of the “Vagina Monologues” and love acting.

“[On his profile] it says that [the donor] did drama as one of his interests,” Debra Stern-Ellis said.

The girls also bought the same fleece jacket on a Tulane Black Friday shopping trip without knowing that the other purchased it, as well.

Nappi and Mikayla Stern-Ellis said they are thankful that they found each other so unexpectedly.

“For me Tulane just felt right, and this is one of the many things that proves I made the right decision,” Mikayla Stern-Ellis said.

“We thought [going to Tulane] she’d just find an education, but she found a sister,” Debra Stern-Ellis said.