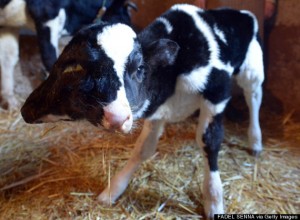 Are two heads really better than one?

For farmers in Morocco the answer is probably yes, since the recent birth of a two-headed calf has brought an influx of visitors to the rural village of Sefrou.

Apparently, the calf did not want to miss out on New Year’s and was born on Dec. 30, just in time to ring in 2014. Farmer owners named the calf Sana Saida (“Happy New Year” in Arabic) in honor of the holiday.

Though relatively rare, several two-headed calfs have been born around the world. In October, another polycephalic calf was born in Vermont. The animal, which would have been a twin if it had split as an egg, died died from natural causes two days later.

Despite good health conditions, two-headed animals usually do not survive long after birth because of the abnormality. While the two-headed calf in Morocco already surpassed the lifespan of the calf in Vermont, local veterinarians are unsure how long Sana Saida will survive.