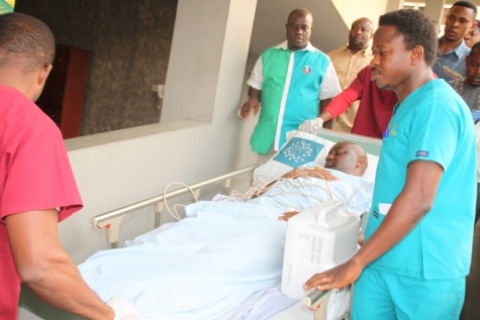 Sen. Igwe Nwagwu, the Chairman of the Senate Committee on Police, said on Tuesday that it had begun investigation of the alleged shooting of Sen. Magnus Abe at a rally in Port Harcourt.

Nwagwu told newsmen in Port Harcourt that the committee was in Rivers on a fact-finding assignment surrounding the incidence that led to the shooting of Abe on Jan. 12.

“We are here in Rivers State to carry out fact-finding on the incident that happened last Sunday where it was alleged that the police shot tear gas and rubber bullets, which incidentally, also affected Senator Magnus Abe.

“We have not concluded our investigation yet; when we conclude our investigation, we will submit our report to the National Assembly for their deliberation and resolution on the matter”, he said.

The chairman said the committee would meet the state Commissioner of Police during its investigation.

Meanwhile, the Chief of Staff, Government House, Port Harcourt, Mr Tony Okocha, has told the committee that the police allegedly used tear gas and rubber bullets to disperse a crowd that gathered to hold a rally.

He said the Save Rivers Movement, an NGO, had applied for police permission to hold a sensitisation rally at the premises of the state College of Arts and Science, Port Harcourt, on Jan. 12.

Okocha said when he got to the venue, there was heavy police presence and that the police allegedly fired tear gas and rubber bullets to disperse the crowd.

He said the rubber bullet hit him on the left leg and also hit Abe, stressing that Abe was rushed to the hospital and later flown abroad for further treatment. (NAN)