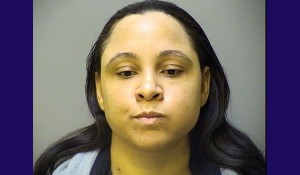 A mentally ill woman who stabbed her infant daughter 10 times in the face with a pair of scissors before boarding a crowded CTA bus and stabbing a woman and her young daughter was found not guilty by reason of insanity Friday.

Nancy Laroche, 34, who was diagnosed with bipolar disorder and schizophrenia, was found by her fiance’s mother kneeling over her crying 10-month-old daughter on Jan. 9, 2008, at their Bronzeville apartment, according to testimony at her bench trial in Cook County Circuit Court.

The girl, who was lying face-up on the bathroom floor, had been stabbed in her face and eyes.

“(Laroche) was saying a sound, but I didn’t understand what she was saying,” Laroche’s fiance’s mother, Sylvia Murray, testified, according to a transcript of the trial.

When Murray confronted her, Laroche went out the front door of their apartment building in the 4700 block of South Indiana Avenue. Laroche ran up to a crowded CTA bus that had just left its stop near 47th and State streets about 7 a.m. and got on without paying, still carrying the scissors.

Ninette Swain, a receptionist, was sitting behind Cannon, taking her 3-year-old daughter to day care before going to work. Swain said Laroche looked right at her, yelled, “Get off the bus!” and brought her hand down on Swain’s face, knocking off her glasses. Laroche then went to the back of the bus — waving her arms and stabbing the air — before a passenger shoved her away, and she ended up back near Swain. Laroche then stabbed Swain’s daughter near her right eye.

“Everybody was screaming. The baby is bleeding,” Swain testified. “That’s when I noticed I was bleeding as well, and everybody started running off the bus.”

Prosecutors said Laroche tried to take control of the bus but was unsuccessful. She then picked up Swain’s daughter and threw her off the bus.

On Friday, Judge Kevin Sheehan found Laroche not guilty of attempted first-degree murder and attempted vehicular hijacking and found her not guilty by reason of insanity on the remaining 14 counts of aggravated battery. He remanded Laroche to a secure Department of Human Services inpatient center for a mental health evaluation.

In 2011, Sheehan found Laroche not guilty by reason of insanity of assaulting two police officers at the Area 1 police station after being taken into custody.