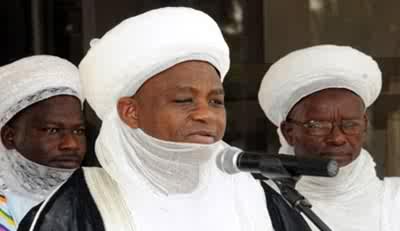 The Sultan of Sokoto, Alhaji Muhammad Sa’ad Abubakar III, yesterday accused political leaders in the North of slowing down the quest for a peaceful and developed region. He particularly accused northern governors of failing to implement various recommendations by traditional rulers on the way forward for the region, which has been bedeviled by activities of insurgents in recent times.

Speaking at a joint meeting of the Northern Traditional Rulers Council and Northern Elders Forum (NEF) in Kaduna, the Sultan said the northern governors were yet to act or respond to the position paper presented to them last year by the Council.

He said, “In our quest to develop the north because we are northern leaders, first we always try to reach out to our political leaders. I want to put it on record here that, even last year, we presented a position paper to the northern governors forum on the way forward to reduce the suffering of our people by lack of education, by insecurity and all sort of things.

“The paper has been given to them and I want to draw the attention of the northern governors forum that we are yet to hear anything on that paper we gave them. They should reach out to us to brief us so that we can continue to contribute on how really to sustain the peace and develop the north.

“We are here to continue our deliberations in our quest to have a peaceful, stable and developed north, as most of you know, in the days of Ahmadu Bello of blessed memory, things were much better than they are now.

“In our quest to have a stable and developed north, we keep up looking to all and sundry, most importantly, look up to our political leaders because they have the leading mandate to administer the north.

“Now, before the present democratic dispensation, traditional institutions have been there. Long before Nigeria was amalgamated, traditional leaders have been ruling and leading people. Today, we have our governors and other political office holders and elders here.

“I want to assure all and sundry that the northern traditional institutions do not have a political party but we are the administrators of our people. Not having a political party does not mean we will not tell our political leaders the truth when they go off the road. We will tell them where they are going wrong when we see it and tell them what to do to bring development to our people. When we give such advice, we will be very happy because we have done our responsibilities.

“If we give them the advice, it is left to them to either accept our advice or not. While we are giving advice, we can always contribute rightly to the development and peaceful coexistence of people in our various places. I want to assure you once again that we don’t have political party. Our political party is the welfare of our people wherever they are and that is our concern and nothing more.

“I read some of the Shehu Danfodio’s literature where he said since the welfare of your people is more important than the use of force, You cannot use force to develop or move people forward. If you take care of their welfare, you will find out that they are always ready to do their best to move the society forward.

“I believe this meeting is very important coming at the time when we have so much challenges in form of insecurity in the north in particular. We all see what happened yesterday in Borno and Bama. When you go to Bama, you will virtually see that there is nobody in the street.

“I think it is important for us to always look ahead to plan into the future. After our meeting and hearing from our northern elders, we will issue a communique that will still be sent to the governors forum because they are our political leaders.

“We are administrators and we will continue doing our best, Insha Allah in our quest for the political leaders to achieve designed goals of our people which is good leadership as they always ask where are the Sardaunas of today. We should also know that we are going to account to Allah our actions as leaders on the D-day. Our political leaders must fear Allah in their dealings with the people”.

Chairman of the Northern States Governors Forum and governor of Niger State, Dr. Muazu Babangida Aliyu, said Nigeria was passing through one of the most turbulent times in its history as a nation.

Aliyu, who was represented by his deputy, Ahmed Musa Ibeto, said political and electoral tension, social and economic insecurity, communal conflicts and civil unrest had reached unprecedented levels in the country, requiring the collective dedication of all Nigerians to address.

Also speaking at the event, Governor Mukhtar Yero of Kaduna State, said: “It is obvious that the present arrangement which places huge expectations on traditional rulers, without any Constitutional or legal provision, has to be changed. The responsibilities, powers and obligations of traditional institutions must be clearly defined by law and some of us are willing to support such move, anytime the issue is up for debate.

“Consequently, I believe it is time to consider an official role for our traditional institutions. Invariably, I am of the notion that the ongoing Constitution Amendment process and the proposed National Conference, has availed us viable platforms for exhaustive debate on ways to legally engage traditional leaders in the process of building a peaceful and prosperous nation”.