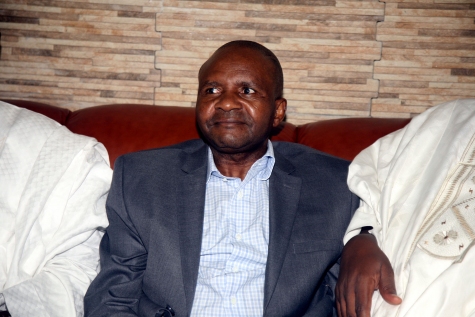 Suntai made the call in Jalingo, the Taraba state capital, where he also spoke about his mental and physical health, more than a year after suffering severe head injuries in an air crash.

In an undated video that ran for approximately two minutes 19 seconds, which was uploaded by online news website, Saharareporters, Mr. Suntai appeared frail and still barely audible as he fielded questions from an unidentified reporter.

Decked in a green polo top with black and light yellow stripes with a bright yellow trouser, Suntai, however, appeared to have improved relative to his last appearance in the media.

He, however, admitted that he had not sufficiently recovered to resume work as governor.

“I can tell you that it is well with me to return to my office simply because I want you to support me. But you know the truth; I am not well at all to return to office as I am now”, the governor said.

Mr. Suntai suffered injury to his brain when a plane he was piloting crashed near Yola airport in Adamawa state on October 25, 2012.

He spent several months abroad where he received treatment before he was smuggled back into the country in August 2013, to forestall the confirmation of his deputy, Alhaji Garba Umar as substantive governor of the state.

Since his return, Suntai’s wife, Hauwa, in concert with some powerful indigenes of the state have been scheming to restore him back to his position as governor even though his state of health remains uncertain.

It would be recalled that Zakari Yusuf Aliyu, a professor of Medicine and Public Health, and Chief Medical Director of Taraba State Specialist Hospital Jalingo, had while the debate raged over the governor’s true state of health, said it could take “weeks, months, even years for him (Suntai) to come back to his pre-accident state”.

Read a transcript of the session and watch video below.

Interviewer: Good to see you. How are you sir? I am happy to see you too, we felt the situation is worse than this but thank God, this is very very interesting. I have been told about your development and how you are improving.

Interviewer: Yes. Good to see you.

Governor Suntai: I’m very grateful to see you. I’m very happy to receive you to this state and I believe my governor has received you. (general laughter)

Interviewer: Yes, yes, he has.

Interviewer: The process of your recuperation, hope it’s going on well?

Governor Suntai: It is going on well

Interviewer:  And what will be your message to Nigerians?

Governor Suntai: Well, if they can put all this things aside and attend to God, I think they will have stopped the problem because this thing God does not like it. But we are doing it when we know that God does not permit us to do it. It is unfortunate that we have decided to listen to the devil in this case. So it is unfortunate that I am involve (sic) in this drinking of hot drinks.

Interviewer: But your Excellency, looking at it now are you well or fit enough to return to your office as the position of the executive governor of Taraba state.

Governor Suntai: Well I can tell you that it is well with me to return to my office simply because I want you to support me. But you know the truth; I am not well at all to return to office as I am now.