Home National News Odd News Surgeons Use Student’s TOE to Replace the Finger he Lost as a...
Facebook
Twitter
WhatsApp 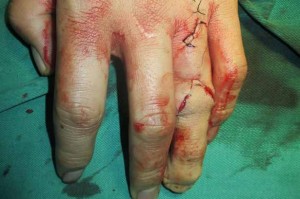 Surgeons have used a TOE to create a new finger for a man who lost one of his digits in a childhood accident.

The third finger on Ha Yuan’s left hand was severed years ago, and the student has lived without it ever since.

But after graduating, and believing employers were discriminating against him because of his disfigurement, he decided to do something about it, the Daily Mail reports.

He said: “My classmates all found jobs in the campus job fairs, but I was refused all the time once the employer saw my left hand.”

After visiting doctors in Changsha, in China’s Hunan province, they decided to amputate the second toe on Ha’s foot, and reattach it to create a fully working finger.

One of his surgeons said those meeting Ha would not be able to tell the difference between the reattached toe and an ordinary finger.

Doctor Lu said: “It’s not easy to tell the difference if people are not looking at it closely.

“The only difference is the size of the nail.”

It will take three months before the finger is able to function as normal.

But Ha said he feels his new life is about to start.