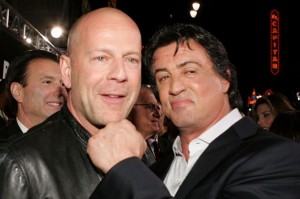 Sylvester Stallone has stopped using Twitter to stay out of trouble.

The actor, 67, previously used the social networking site to have a pop at his former Expendables co-star Bruce Willis, 58, calling him “greedy” and “lazy”.

Now, following the outburst in August, he admits to taking a back seat because he doesn’t want to be “an idiot”.

Sylvester, who is starring in new film Grudge Match with Robert de Niro, said: “Everytime I use social media I really get in trouble.

“I think George Clooney says it best. You’ve got to be an idiot if you use Twitter and you wake up in the morning sober and you realise your career is over.

“You’ve got to be really really careful you dont think you’re a genius up there in the middle of the night.

“I’m just really into the iPhone, I’ve got to figure out how the camera works, people say why don’t you get an instagram but isn’t it for younger people?”