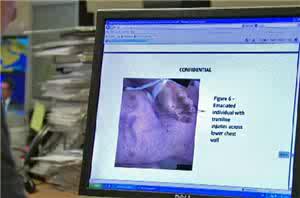 The defector, identified only as “Caesar”, presented about 55,000 images of 11,000 dead prisoners since the start of the uprising in Syria in March 2011. The evidence was viewed by forensic experts commissioned by a London legal firm representing Qatar.

The defector claims that the victims all died in captivity before being taken to a military hospital to be photographed.

“The pictures show over a period of years the systematic murder of detainees by starvation, by torture, the gouging out of eyes, the hideous beating of people, the mutilation of bodies,” De Silva said.

The report says that all but one of the victims were male. Most appeared to be aged between 20 and 40 and a “very significant percentage” showed evidence of starvation.

The defector “informed the inquiry team that there could be as many as 50 bodies a day to photograph which required 15 to 30 minutes of work per corpse”, the report said.

He said the purpose of the photos was firstly to be able to issue death certificates – falsely saying that the victims had died in hospital – and secondly to confirm to the regime that executions had been carried out.

The bodies would then be buried in rural areas.

The authors of the report said they found the informant and his evidence to be credible after subjecting them to “rigorous scrutiny” and have made their findings available to the UN, governments and human rights groups.

The fact that the defector had not claimed to have actually witnessed any of the killings added credibility to his story, they said.

He later escaped from Syria fearing for the safety of his family.

“There came a point a few months ago where he decided that he couldn’t take it anymore, so he decided to defect and he left. He could well have gone to Qatar, yes,” said De Silva.

Crane called the evidence “amazing” and suggested there was a strong case for prosecution.

“Now we have direct evidence of what was happening to people who had disappeared,” he said.

“This is the first provable, direct evidence of what has happened to at least 11,000 human beings who have been tortured and executed and apparently disposed of.”