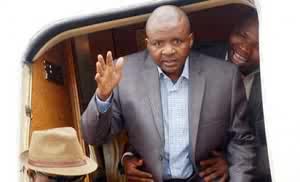 Deputy Governor of Taraba State, Alhaji Umar Garba, has allegedly issued instructions curtailing the movements of Governor Danbaba Suntai and  his aides, including restriction of visitors to the recuperating Suntai.

This was contained in a statement by a group, Taraba Peoples Vanguard, released yesterday, in Kaduna.

The statement by Chief Lidua Bako and Shawalu Garba,  National Coordinator and Secretary of the group respectively, also dismissed media reports that Suntai had visited Abuja to confer with President Goodluck Jonathan on his bid to return to power, saying he actually went to see his medical consultants and to meet with Gen. Theopheluos Danjuma (rtd) and other important indigenes of Taraba State.

“We, the Taraba People’s Vanguard across the 35 states of the federation, have followed with very keen interest political developments in our state from the time  governor,  Danbaba Danfulani Suntai, was involved in that unfortunate air crash which the Almighty God, in His infinite mercies, rescued him from death. Unfolding political developments in the state since that time has been very shameful and especially the recent  moves to hijack the free mandate given Governor Danbaba Suntai by the overwhelming majority of Tarabans.

“It is quite disturbing that on 14th January while Muslims were busy celebrating the Ed – Maulud holiday, Deputy Governor Garba Umar of Taraba State convened a State Security Council meeting where he read out the following riot acts: That all the security aides of Governor Danbaba Suntai be transferred out of Government House, Jalingo.

“That henceforth all visitors to Governor Danbaba Suntai must be approved by the Deputy Governor, the Commissioner of Police or the governor’s younger brother, Babangida.

“That henceforth, apart from Sunday Church services, he must approve the governor’s movement within and outside the state.

“That, henceforth, all flights that would land at the Jalingo airport must first seek and obtain landing clearance from him.

“Already a letter to implement this directive has been written and forwarded to the Airport Controller by Garvey Yawe, the SSG to the Deputy Governor.

“That the SSG and Chief of Staff appointed by Governor Suntai on his return from America have been banned from entering the Government House Jalingo.

“Our informant who is also a member of the State Security Council disclosed that the Deputy Governor severely warned everybody in the State Security Council meeting not to be caught amongst those who would attempt to contravene any of the above acts as he emphatically threatened that such a person would be summarily dealt with because, according to him, he has the blessing of Mr. President to read out the riot act.

“Despite numerous media propaganda sponsored by Umar that the governor went to Aso Rock and was rebuffed, unknown to the Deputy Governor, Governor Suntai never went to the Aso Rock or even sought to meet the president but went on a private medical visit to his consultants and to consult with prominent Taraba indigenes on the current developments in the state.

“This Vanguard was reliably informed that the frustration of Alhaji Garba Umar with Lieutenant General TY Danjuma is over the General’s refusal to recognize him as the Acting Governor but as Deputy Governor of Taraba State.

“In another swift move to send Governor Suntai completely out of the state so as to pave way for Alhaji Garba Umar was the suggestion by the Attorney General and Commissioner for Justice appointed by Umar that Suntai be moved out of Nigeria back to hospital in America. This was vehemently opposed as it did not receive the blessing of most members of the Security Council.”

A close aide of Umar, who spoke to Sunday Vangaurd, however dismissed the allegation as a lie, stressing that such a development never happened.

“The acting governor is still loyal and respectful to the ailing Governor. He would never give such instruction. He has stabilised the state and is waiting for his boss to get well enough and come back to his office”, he stated on phone.