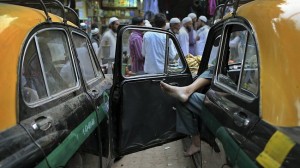 India is fast becoming notorious for r*pe, and tourists are becoming the hardest hit by the scourge.

A Polish woman was drugged and r*ped as she travelled to New Delhi with her two-year-old daughter, police have said, the latest in a string of s*xual attacks on women in the country.

The woman, 33, and her daughter were travelling in a taxi from the city of Mathura where they live to the Indian capital last Thursday when she was allegedly r*ped by the driver.

The driver drugged the woman at some point during the 150-kilometre journey and she was attacked after she passed out, Delhi police spokesman Rajan Bhagat told AFP.

The woman woke up on a bench outside a railway station in New Delhi with her toddler crying by her side, the officer said, adding that details of the attack were still unknown.

“It is still a bit unclear, but prima facie, it seems she sat (in the taxi) voluntarily. But yes, thereafter, in the car he drugged her using some spray … medical report has confirmed rape,” he said.

The woman, who cannot be named for legal reasons, reported the incident to police who are searching for the driver, Mr Bhagat said.

The woman, a devotee of the Hindu god Krishna, had been living in Mathura – believed to be the birthplace of Krishna – in Uttar Pradesh state for the past three years and worked in the cloth export business, he said.

She and her daughter had been waiting on a busy road in Mathura for a taxi to take them to the capital when the driver approached.

The January 2 incident comes barely a week after India marked the first anniversary of the death of a student who was gang-r*ped on a New Delhi bus in an attack that sent shockwaves across the nation.

The gang-r*pe triggered massive protests over the levels of violence against women, but in the last 12 months there have been several more cases of local and foreign woman being attacked.

A judge last month sentenced three Nepalese men to 20 years in jail for the gang-r*pe of a US tourist in June in the northern state of Himachal Pradesh.

Six men were sentenced to life in prison in July last year for the g*ng-rape and robbery of a 39-year-old Swiss woman cyclist who had been holidaying in the central state of Madhya Pradesh.