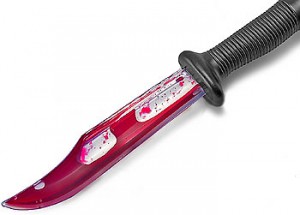 A 14-year-old girl repeatedly stabbed her 11-year-old half-sister to death with a kitchen knife for being “ungrateful” to her, prosecutors said in a suburban Chicago courtroom Wednesday.

First-degree murder charges were approved for the unnamed 14-year-old girl after her half-sister was found dead in their Mundelein, Ill. home early Tuesday, prompting a lock-down at three local schools.

“She indicated she was mad from the night before,” Asst. State’s Atty. Claudia Kasten said in court according to the Tribune. “She went downstairs and got a kitchen knife … With each stab wound she said she was not thankful for what she (the older sister) had done.”

Police responded to the 1600 block of Woodhaven Court about 8:25 a.m. Tuesday over a call of an unresponsive girl in the home, the Sun-Times reports. Inside, police found the young girl dead inside a bedroom.

According to prosecutors, the suspect showered after the killing, called her mother and gave a false story of waking to her sister’s screams and seeing male intruder, ABC Chicago reports. The girl’s story then broke down when police confronted her with the possibility of incriminating DNA evidence from hair found in the victim’s hand.

The Lake County Coroner said the victim suffered about 40 stab wounds from a weapon “consistent with a fillet knife,” some of which were inflicted when the young girl tried to defend herself.

Officials said during a Wednesday news conference (embedded below) no one else was home at the time of the incident but that charges will not be filed against anyone but the teen suspect, who could still be charged as an adult in the coming weeks.

Chief George Filenko, head of the Lake County Major Crimes Task Force, called the homicide “an extremely tragic event that shook even the most seasoned investigator,”according to the Daily Herald.

The discovery prompted Mundelein High, Mechanics Grove Elementary and Carl Sandburg Middle schools to immediately go on lockdown, which was called off around 9 a.m. Tuesday, the Tribune reports.

Guenther said schools were locked down as a “precautionary measure” since the crime scene where the 11-year-old was found was 1,000 feet from the nearest school.