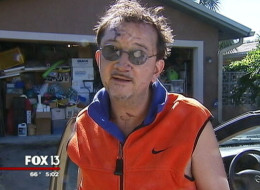 The parents of a St. Petersburg, Fla., teen accused in a brutal attack on his neighbor say their son may have been under the influence of synthetic drugs.

The teen also allegedly attacked officers when they tried to subdue him.

Sorace, whose injuries are still clearly visible, said that he heard a commotion outside and came to the window on Sunday around 2 a.m. He allegedly saw Davis beating a dog and “yelling about Jesus Christ and the devil,” Sorace told Fox Tampa Bay.

When Davis saw Sorace at the window, the teen turned on him, breaking down his neighbor’s door.

“He thought the dog was the devil, and then the next thing he sees is me, illuminated. And all of a sudden, I’m the devil,” Sorace told the station.

“He broke a flower pot over my head, he was sticking me in the neck with pieces… he stuck his thumb all the way in my eye socket and he just ripped my mouth and he bit my face. He was chewing, he chewed my hands.”

By the time police responded, Sorace was motionless on the floor and barely conscious, yet the teen continued to beat him.

“The suspect told him he was going to eat his eyes,” police spokesman Mike Puetz said, according to the Tampa Bay Times.

It took four officers to restrain the teen, according to the paper.

“Even after being tased twice, he was still fighting,” Puetz said. “He bit one officer in the hand, and attempted to kick and strike others… The scene was rather bloody.”

Police and neighbors are still trying to make sense of the gruesome attack. Davis’ parents told police that he may have been under the influence of synthetic drugs or hallucinogens at the time of the attack.

Fox Tampa Bay reports that the teen, who remained under sedation at a local hospital as of Tuesday afternoon, had no prior issues with the law.

Neighbors described him to the station as a “polite, sweet, loving, well-accomplished” boy.