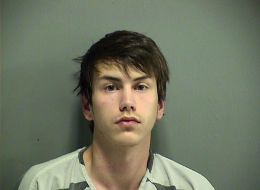 A Louisiana teen was arrested Tuesday in the fatal shooting of his father and half-sister.

Jacob Middleton, Jr., 17, is locked up at the St. Tammany Parish jail on two counts of first-degree murder, the Times-Picayune reports.

Jacob Middleton, Sr., 35, and Makayla Middleton, 2, both died from gunshot wounds to the head, according to a coroner’s report obtained by WVUE. The victims were found at a home near near Abita Springs.

A statement from the sheriff’s office pointed to domestic abuse as a possible motive:

“During questioning by sheriff’s office investigators early this morning, Middleton admitted to shooting his father and his half-sister. He indicated that his actions were the result of, among other things, his hatred of his father for what he claimed was years of abuse and family violence.”

Authorities had responded to domestic disturbances at Middleton’s home in the past, WAFB reports.

“Any time a crime such as this occurs with such a young victim, it makes us want to hold onto our own children and remember the blessings of family,” Sheriff Jack Strain said, according to WVUE. “These crimes defy explanation or logic, but we will remember those who were lost in this senseless tragedy and pray for those they leave behind.”

Middleton is being held without bond.