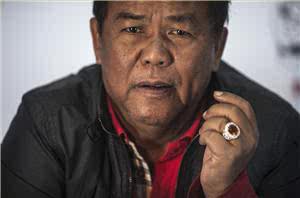 Violence continues in Thailand as a leader of the pro-government ‘red-shirt’ movement was shot and wounded outside his home in northeast Thailand, hours after Prime Minister Yingluck Shinawatra enforced a state of emergency in Bangkok and its surrounding areas.

Kwanchai Praipana, who leads thousands of pro-government supporters in Udon Thani, was shot and wounded by unidentified assailants in a drive-by shooting on Wednesday.

The shooting comes shortly after the government of Yingluck Shinawatra introduced a state of emergency to cope with protests aimed at ousting the embattled leader from power.

The decree follows increasing attacks at protest sites for which the government and protesters blame each other.

Announcing the 60-day emergency late on Tuesday, ministers said they had no plans to clear the camps that protesters set up at seven major road junctions in the city.

Rather, they said they wanted to prevent an escalation of violence after deaths and injuries caused by grenade attacks on demonstrators over the weekend.

Despite the decree, most of the capital remained unaffected by the state of emergency, with a light police presence, no overnight curfew and protesters on the streets.

The protests are the latest episode in an eight-year political crisis that has gripped Thailand since Yingluck’s older brother, former prime minister Thaksin Shinawatra, was ousted by royalist generals seven years ago.

The conflict pits the middle class of Bangkok and royalist establishment against Yingluck and her brother and their support base among the rural poor in the north and northeast.

Protesters want Yingluck to step down to make way for an appointed government that would oversee electoral reforms and curb the political dominance of her family.

Protesters have threatened to disrupt the election Yingluck called for Feb. 2. The opposition Democrat Party, closely aligned with the protesters, is boycotting the polls.

Protest leader Suthep Thaugsuban, a former deputy prime minister has rejected the election outright. He accuses Thaksin of corruption and nepotism and wants to change the electoral system to eradicate the influence of Thaksin, who lives in exile in Dubai to avoid a jail term handed down in 2008 for abuse of power.

The Election Commission said it would seek a ruling from the Constitutional Court on Wednesday on whether it could delay the vote.

Adding to Yingluck’s problems, farmers, who are part of her core constituency, threatened to join the protest if they did not get paid for the rice they sold to the government under a controversial intervention scheme.