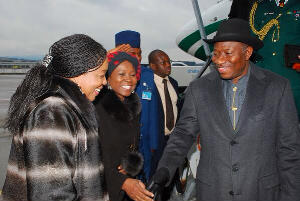 Former Minister of Information in the First Republic, Chief Edwin Kiagbodo Clark, has said that President Goddluck Jonathan’s administration is divinely-ordained, warning that those opposed to his government are fighting God.

“Any person fighting Jonathan is fighting God. Whatever God said you will be that is what you will be and whoever wants to remove him (Jonathan), God will fight him. Under the grace of God, Jonathan became the acting president and later president. What is yours, nobody can take it from you,” Clark said.

“Some people said that they must rule and if Jonathan runs, there will be bloodshed. Majority of the northerners believe in Jonathan and want him to continue. Whoever wants to split this country will fail.

Clark said this yesterday when the Federal Capital Territory (FCT) chapter of South-south community leaders, chiefs and elders honoured him as their grand patron.

The elder statesman insisted that the constitution permits Jonathan to run for a second term, adding that as a lawyer who had practised for 50 years, he always laughs when educated people say Jonathan cannot run and that he has been sworn-in twice.

He said when it was sold to Jonathan that he should be Vice President, his first reaction was he will not take the position.