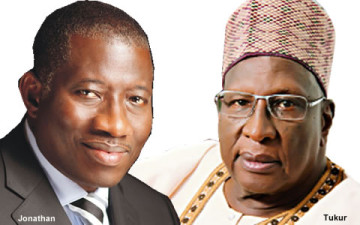 There are indications that immediate past national chairman of the Peoples Democratic Party (PDP) Dr. Bamanga Tukur maybe appointed the next Minister of Defence by President Goodluck Jonathan. The ministry has been without a substantive minister since June last year and is presently supervised by Information Minister, Mr. Labaran Maku.

Last week, while announcing that Tukur had resigned his position as chairman of the ruling PDP, the president noted that he [Tukur] had not committed any offence but that he wanted to give him what he termed as ‘tough’ and important appointment.

According to Vanguard, contrary to the general belief that Tukur was asked to resign as PDP chairman because of his inability to unite party members and bring an end to the incessant crisis in the party, President Jonathan only told the former chairman to step aside for another appointment.

Jonathan’s decision to appoint Tukur as the new Defence Minister is based on his belief that the former governor is not only a detribalized Nigerian, but somebody that cannot be bought over no matter the incentive.

Secondly, the president and First Lady, Dame Patience Jonathan, see Tukur as a dependable ally and staunch supporter of Jonathan’s second term ambition. A perception the former party chairman attempted to take advantage of to prevent his removal from office.

According to sources, “the fact that the north eastern part of the country has been the hotbed of terrorism, leading to the declaration of a state of emergency in Borno, Yobe and Adamawa states last April, with some elders of the area, who are allegedly sponsored, claiming that the military onslaught on Boko Haram has ulterior motive” is also said to have played a role in the President’s decision.

“With Bamanga Tukur as Minister of Defence, and overseeing the quest to have a terror-free society and revival of peace and security in Borno, Yobe and Adamawa states, the so-called elders and groups who are politicizing very serious security threats to the nation and its citizens will be made to understand that government’s intention in the North-East is noble”, the source added.

If Jonathan eventually appoints Tukur as Minister of Defence, he would become the second PDP chairman to be appointed in such capacity as the position was left vacant by a former chairman, Dr. Bello Haliru Mohammed.