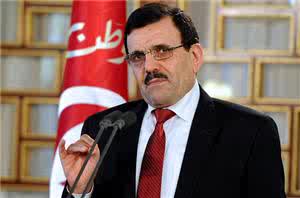 Tunisia’s prime minister has resigned, in line with an agreement aiming to end months of political deadlock in the country.

Ali Larayedh, of the ruling Islamist Ennahda party, announced on Thursday that he had handed his resignation to President Moncef Marzouki.

“As I promised to a short while ago … I have just submitted the government’s resignation,” Larayedh said.

His resignation comes as part of a blueprint to put the democratic transition in Tunisia back on track after the assassination of Mohamed Brahmi, an opposition MP, last year.

Under the plan, Larayedh is set to be replaced within 15 days by Mehdi Jomaa, the prime minister- designate, at the head of a government of technocrats that will lead the country to fresh elections.

“The president will appoint the new Prime Minister Mehdi Jomaa shortly, and he will present his new cabinet in the next few days,” Larayedh said.

“I hope the country will be a model for democratic transition.”

Ennahda has been under mounting pressure to relinquish power after it was elected in 2011 following a popular uprising that deposed long-time President Zine El Abidine Ben Ali.

Tunisia’s national assembly is in the process of approving a new constitution, and elections for a new government are due to be held later this year.

An independent authority was established on Wednesday to oversee the upcoming elections, a requirement that Ennahda had set as a condition for stepping down.

The approval of a new constitution, which Ennahda had also demanded in exchange for handing over power, is on track to meet an agreed deadline of January 14, the Tunisian uprising’s three-year anniversary.

The new charter had been delayed for months by the withdrawal of opposition assembly members in protest at Brahmi’s killing in July.