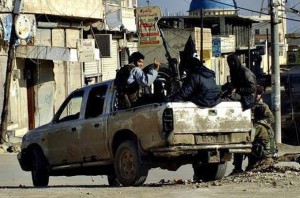 Turkish fighter jets have hit a convoy belonging to the al-Qaeda-linked Islamic State of Iraq and the Levant (ISIL) in northern Syria, according to a local media report quoting a statement from the Turkish military.

A report on Turkey’s Todays Zaman website said that Turkish F-16s struck a number of ISIL vehicles “after militants opened fire on a military outpost” on the Turkey-Syria border on Wednesday.

Broadcaster NTV said Turkish troops opened fire on the ISIL positions after a mortar shell fired from Syria landed in Turkish territory during clashes between ISIL and the Free Syrian Army.

The broadcaster said a pickup truck, a lorry and a bus were destroyed in the Turkish retaliation, but there were no reports of casualties.