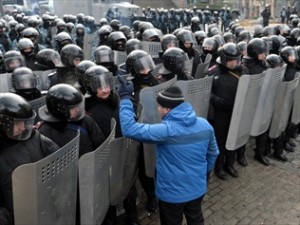 Two activists have been shot dead as Ukrainian police stormed protesters’ barricades in Kiev, the first fatalities in two months of anti-government protests.

Hours after the deaths were reported on Wednesday, police launched a fresh assault on the protesters in central Kiev, driving into their lines using tear gas and stun grenades.

The protesters fought back in intense clashes, with casualties being loaded into ambulances.

The deadly violence horrified Ukrainians, who have never witnessed such scenes in their country, including during the 2004 Orange Revolution which was almost entirely peaceful.

The EU called for an immediate end to the violence and the US slapped visa restrictions on Ukrainian officials it blamed for cracking down on protesters.

But Ukraine’s prime minister labelled the radical protesters behind the clashes as “terrorists”.

New clashes broke out as the police arrested protesters and created a large hole in barricades set up behind the burned-out wrecks of destroyed police buses.

General prosecutors confirmed earlier information from the protest movement that two activists had been shot dead, one of them with wounds to head and chest.

Protesters claimed they were shot by police snipers but this was not confirmed.

Meanwhile, the medical centre of the protest movement said a third activist was killed after falling from the top of the ceremonial entrance to Dynamo stadium near the protests.

With Ukraine supposedly celebrating its annual day of unity, President Viktor Yanukovych prayed for the country at a ceremony to mark the occasion, the presidency said.

Ukraine’s Prime Minister Mykola Azarov indicated that the government was in no mood for compromise, savaging the behaviour of the protesters.

“The cynicism and amorality of the terrorists has reached a point that they are throwing Molotov cocktails right at living people,” he told a cabinet meeting.