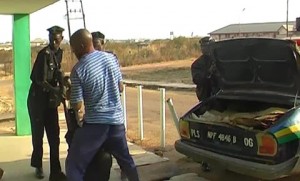 A popular Pastor who operates and resides in Oyo State, Pastor Adepoju who was a former pastor at The Apostolic Church, TAC, Oke Afata, has stabbed his pastor friend to death in his home. Adepoju left Ibadan for Osun State to meet with his friend, identified as Pastor Julius Olusoji Oguntoye in Osun State pretending to be there for a courtesy visit.

After Pastor Oguntoye welcomed him to his home, Pastor Adepoju immediately brought out a knife from his suit and stabbed his friend several times, on his head, chest and stomach. While stabbing him, he
accused him of using his glory and that of his children…

Oguntoye, 48, was buried on Monday in Ede, Osun State amid tears. Some of his members described him as an easy going person who cannot hurt a fly. He was reportedly transferred to Gbongan five months ago from Ede, where he served for 12 years as a Pastor.

Interestingly, Adepoju was the best man of late Oguntoye when he got married several years ago. The killer pastor has been arrested by the police and charged to court.

The angry judge immediately remanded the pastor in prison pending his trial.