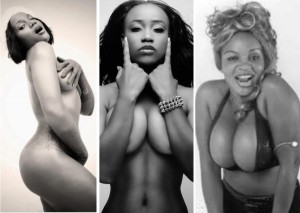 With the likes of singer Maheeda and Dencia, actress Afrocandy, model Ify Jones, Iyanya, Peter Okoye of Psquare and others leading the trend, celebs have found a way to take advantage of every opportunity to show off some skin, be it on the red carpets or on Instagram photos.

This trend has gotten many the much-needed attention that they crave to forge ahead in their careers as musicians, actors or models. It starts with a little show of cleavage and then other major body parts begin to follow in the raunchiest of photos.

When asked in an interview why she takes pleasure in posting her nud* photos online, the controversial singer Maheeda stated that, ‘It is deliberate. I know what I am doing. The pictures are not targeted at anything.

It is all about attention and there is no mistake about it. This business of music is called show business and I am convinced I am on the right track. I owe no apologies. I just realised this way will be a faster hit than any other way. The pictures are working for me’.

While the ladies strut around displaying their boobs, the guys on the other hand are always eager to show off their six packs and abs, and most times not afraid to strip on stage revealing a crotch. As in several cases that we have witnessed, sometimes, the lady fans are allowed to get a feel of their crotch in some show of sexuality and appeal.

Celebs getting naked isn’t exactly a new phenomenon but the last year saw more of them shedding their clothes in the name of promotion. Celebrity nude photos inspire instant fascination from a lot of fans, most of who hardly care but even wish for full disclosure.

With phrases like ‘nudity and s*x sells’ and ‘s*xy is the new cool’, we seem have come to an era where showing some skin seems to be the in thing and sometimes termed the new definition of sexy. Like many will say in defense of their actions, ‘if you have it, flaunt it’.