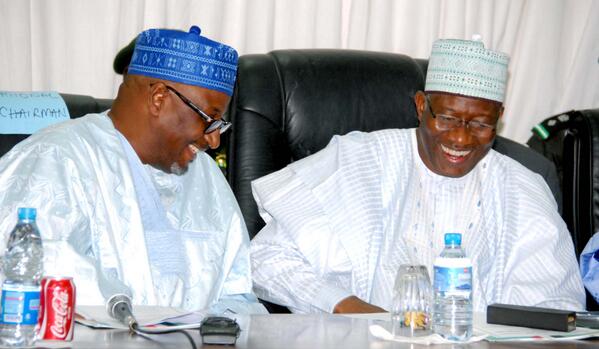 As Nigerians express optimism that the appointment of Alhaji Adamu Mu’azu will bring an end to the crisis rocking the ruling Peoples Democratic Party, PDP, President Goodluck Jonathan has given an insight into the choice of the former Bauchi State governor to pilot the affairs of the party at its most trying period yet.

In his remarks yesterday at the 64th National Executive Committee, NEC, meeting of PDP, President Jonathan said Mu’azu was chosen to replace Bamanga Tukur because he has a wide outreach, has a unique character with friends across the country, and that at this period in the life of PDP, the party requires a bridge builder like the former PENCOM boss, who he described as friendly; one who can reduce tension in the states and not fight.

According to Jonathan, most PDP governors do not want chairmen from their states, but the party was making history with the new chairman having the total support of his governor, Malam Isa Yuguda, who moved the motion for the ratification of Yuguda’s appointment, adding that with the latest development, the story would change.

He, however, tasked the new National Chairman on the need to ensure that there was no infighting between the national Secretariat, the Governors and leaders of the party, even as he reiterated that the Party lost in some states because of the fight among the leaders.

His words: “When the issue of chairmanship came up, a number of people came to me, talking about who should be the chairman of the party. Some mentioned the attributes of somebody that we should select to lead the party and I agreed with them totally on those things they raised.

“Let me at this point appreciate really all those who showed interest; we didn’t call them aspirants, because we didn’t sell any form. So, there was no aspirant, but people showed interest and all those who showed interest are eminently qualified to chair the party. But among these people that are qualified, we selected Adamu Mu’azu. We selected you because most of those who made comments about you, which of course, a lot of things have been said, were that you have some unique attributes as a person. You have so many friends from the North to the South, from the West to the East. You are somebody that could be clearly described as not tied to tribal sentiments”.

Earlier at the start of the meeting, the Deputy National Chairman, Prince Uche Secondus, who presided, stressed the need for genuine reconciliation as well as the restoration of confidence among members of the party. He stressed that Article 47(6) of PDP’s constitution, however, approved the appointment of Mu’azu as National Chairman pending when an election would be conducted.

Secondus, thereafter, called on Governor Yuguda of Bauchi State to move a motion for the nomination of Mu’azu for the position and the motion was seconded by Senate leader, Senator Victor Ndoma- Egba.