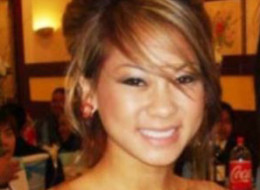 A Southern California woman faces a murder charge in the fatal beating of a woman outside a Santa Ana night club last weekend.

Vanessa Tapia Zavala, 25, is one of five people who allegedly attacked 23-year-old Annie Hung “Kim” Pham outside of the Crosby Bar and Nightclub early Saturday.

A friend of the victim’s told the L.A. Times that the altercation began after Pham accidentally photobombed a group of Zavala’s friends.

The fight was recorded on cell phone video, which police then reviewed, according to the newspaper.

“Two or three of the female suspects knocked her to the ground, were physically assaulting her and kicking her, and they fled the scene,” Santa Ana police Cpl. Anthony Bertagna said, according to KABC.

Pham, who was unconscious when police arrived, died from her injuries Tuesday after being taken off life support.

Zavala was arrested Monday. She appeared in court Wednesday and pleaded not guilty to murder, according to KCBS. Her attorney, Kenneth Reed, said his client is horrified by the violence.

“Your day is fine, your life is fine, you have a 5-year-old son, you go out one night on a Friday with your boyfriend and then your life is turned upside down and you find out someone is killed,” Reed said. “No matter what the situation is, you’re going to be devastated.”

Police are still searching for four other suspects in the beating death, including two women and two men. A $10,000 reward is being offered for information leading to the arrest of the other suspects.

Santa Ana Police described the suspects as Hispanic, aged 20 to 25, according to KABC.

Pham, a recent graduate of Chapman University’s psychology program, was remembered by family as having a big heart and a sunny personality.

“She had so much to give back, so much to experience,” her uncle, Erik Doan, told the L.A. Times. “And it was cut so short.”