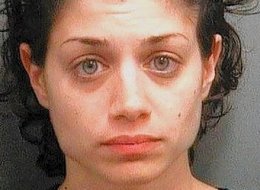 This anniversary really got her motor running.

Floridian and aspiring model Lisa de Lapi, 28, cewas arrested after she allegedly tried to run over her boyfriend with a car on their special day of love Monday, WPBF reported.

Palm Beach Deputies say de Lapi, a Royal Palm Beach resident, told them her 27-year-old boyfriend “set her off,” so she responded by attempting to mow him down with her red Pontiac. She missed him, but then allegedly drove over his bike and crashed into his parked car. Investigators also said de Lapi informed them it was the couple’s anniversary and they have been dating for a year and a half

The boyfriend confirmed to authorities that his girlfriend was upset, according to the Sun Sentinel.

A Model Mayhem page that appears to belong to de Lapi, and on it she says, “I love fashion and want to do things that other models wont do! all the odd stuff!!!”