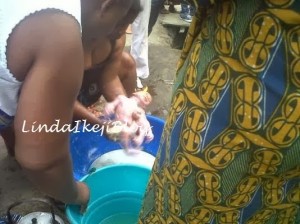 A Pregnant Mentally deranged Woman popularly known as Sister Esther delivered a baby boy around 7am on Thursday January 16th, on the road in front of No. 7, Adisa Akintoye Street, Ketu – Tipper. Lagos
eye-witness Informed our News Crew that five women helped the woman to deliver her baby. They removed their wrappers to shield her while in labour and people in the neighbourhood also brought things
like baby clothes, blade, thread, palm oil, water, sponge, soap, diaper, spirit etc that were used to cut the umbilical cord and bath the baby.

The eye witness said after the delivery instead of taking the baby to a nearby health centre, they took the new born to the palace of the King of Ketu that is on the same street the destitute delivered but the King did not attend to them.
The people then took the baby to Tipper Garage (bus stop) where sister Esther usually sleeps, in front (outside) of Sweet Sensation at Tipper Garage.
As of the time of filing this report, the baby and the new mother were still at the garage.