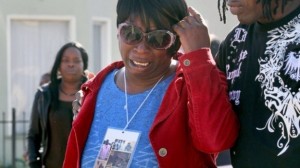 Three days after burying her 13-year-old son, Dinyal New‘s grief intensified when her 19-year-old son was gunned down just blocks from their home, reports ABC News.

“All my boys are gone,” said New, 41. “I’m numb. I am stunned. I am mad. I am angry and hurt. I hope that somebody please comes forward if they saw something to tell the police.”

New’s 13-year-old son Lee Weathersby III was gunned down on New Year’s Eve approximately one mile from their home. His older brother Lamar Broussard was shot and killed 19 days later a few blocks from their home in East Oakland.

No arrests have been made. An Oakland police spokesperson said the department is looking into the possibility that the slayings are linked.

Lee Weathersby III, described by his mother as an avid basketball player and drummer for his school band, was shot on Dec. 31 as he walked home from a friend’s house after he attended a party at a nearby Boys & Girls Club.

On Sunday, Broussard and his childhood buddy, Derryck Harris, 19, were killed while riding in New’s Audi, his mother said. She said Broussard was going to pay her cellphone bill.

Broussard was a college student who aspired to be a musician and start his own business, New said. She added that the family had considered sending Broussard to live with a cousin after his younger brother was killed.

“But, he said, ‘Mom, you need me right now,’ ” New said, wiping away tears. “Lamar was just consoling me at his brother’s funeral — and now we have to bury him.”

Though emotions are high in their East Oakland neighborhood, New insists that she wants justice, not retaliation.