Woman Runs 500 Kilometers in 86 Hours without Any Sleep 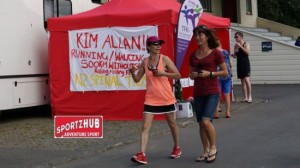 Kim Allen, a 47-year-old ultra-distance runner from New Zealand, recently broke the world record for running the longest distance without sleep. She surpassed the previous record of 486 km (set by American Pam Reed in 2005) by running a whopping 500 km. It took her 86 hours, 11 minutes and 9 seconds of non-stop running to complete the challenge.

Kim began at 6 am on the 19th of December, in Auckland, and kept at it for four long days. She ran initially, but slowed down to a walk in the final laps. The mother-of-four called her achievement “Sleepless in Auckland.” “It’s all a bit surreal at the moment,” she said, shortly after completing the feat.

This wasn’t her first attempt; Kim tried to beat Reed’s record last year, but she could only manage 370 km before she had to stop. This time, she reached her goal with blistered feet and swollen ankles. But Kim was so ecstatic about her achievement that she referred to her state as “just a bit weary.” She also said that she was overwhelmed and could not believe her quest was over.

Kim ran in support of the New Zealand Spinal Trust. Claire Donachie, a representative of that charity, had held up one end of the finishing tape. She was also one of the first to congratulate Kim. Michael Rodliffe, one of Kim’s supporters, said there wasn’t any fanfare when Kim broke the record by crossing the 486km mark. “We didn’t want to give her an excuse to stop,” he said. “In two hours’ time when she’s finished the 500, we’ll celebrate.”

Kim did celebrate her victory by going home with her family and catching up on some much-needed sleep.