The Nigeria Football Federation has demanded a 40-man list from Stephen Keshi preparatory to the 2014 World Cup in Brazil. 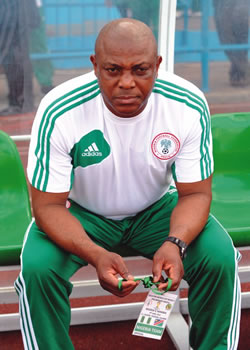 MTNFootball.com gathered that the NFF technical committee asked Keshi to make available a list of players from which he will pick his final 23-man squad for the World Cup in June.

“We expect the coach to send through this list at the latest after the CHAN,” a member of the committee informed MTNFootball.com

It is expected that the core of this 40-man squad will come from the bulk of the players who featured at the 2013 Africa Cup of Nations and also qualified the country to a fifth World Cup.

It is left to be seen if Keshi will recall skipper Joseph Yobo, who has seen limited action at Turkish club Fenerbache after he fell down the pecking order, and England-based striker Osaze Odemwingie.

Osaze had a major fallout with Keshi after he was sensationally overlooked for the 2013 AFCON. It would also be interesting to see some of the other players Keshi is now considering for the tournament.

Ukraine-based midfielder Lukman Haruna, Chinedu Obasi, Raheem Lawal and Joel Obi are believed to be among those that will be given a chance to fight for a place on the flight to Brazil.