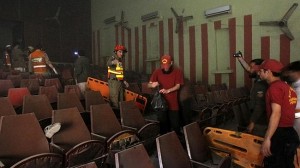 12 people were Tuesday killed in a triple grenade attack on a cinema showing pornography in northwest Pakistan as government and Taliban negotiators met for a second round of peace talks.

It was the second of such attack within two weeks on a cinema in the city of Peshawar, which has been on the front line of Pakistan’s homegrown Islamist insurgency.

The attack came as negotiators representing the Pakistani government and Taliban militants met for a second time as part of efforts to end the bloody seven-year rebellion.

After the meeting in Islamabad the chief negotiator for the Taliban, hardline cleric Maulana Sami-ul-Haq, said the two sides had proposed a ceasefire “to make the atmosphere for talks more conducive’’.

Peshawar city police chief Mohammad Ijaz Ahmed said three grenades were used in the attack and up to 80 people were in the Shama cinema at the time.

A statement from Peshawar’s Lady Reading Hospital said 12 men were killed in the attack, including two Afghans, and 24 were wounded. 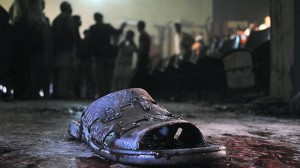 The Shama cinema has been in business for more than 30 years. It has been attacked twice before by Islamist activists, but Tuesday was the first bombing.

Tuesday’s attack bears striking similarities to one on the city’s Picture House cinema on February 2, when two grenades were thrown into the auditorium. Four people were killed and 31 injured.

The Tehreek-e-Taliban Pakistan (TTP) umbrella group denied responsibility for Tuesday’s attack – as they denied the earlier one – but it will nevertheless fuel scepticism about the talks’ chances of success.

Nearly 7000 people have been killed in the TTP insurgency since it began in 2007, according to an AFP tally.

The start of 2014 has seen a surge in militant violence with more than 130 people killed.

An air force bombardment of TTP hideouts in North Waziristan led many to believe a major military offensive was imminent until Prime Minister Nawaz Sharif announced the peace talks.