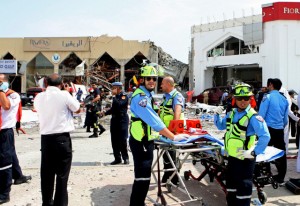 No fewer than 12 people were killed, including two children, and dozens of others wounded in an apparent gas cylinder explosion at a Turkish restaurant in the Qatari capital of Doha.

The blast happened on Thursday at about lunchtime, and caused extensive damage to the Istanbul Restuarant, which is next to a petrol station near the Landmark Mall shopping complex.

Preliminary investigations suggested a gas tank exploded, setting off a fire and causing part of the building to collapse, he told a news conference.