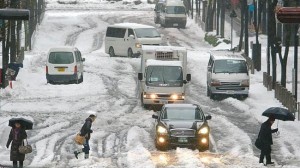 A severe snowstorm sweeping across Japan has killed 12 people and left more than 1,650 injured.

At least a dozen people have died in snow-related incidents in seven prefectures after the storm broke records, with Tokyo blanketed in 27 centimetres of snow, according to Kyodo news agency.

A further 2,150 people have been evacuated from their homes over fears the weight of the snow would cause their houses to collapse, public broadcaster NHK said.

At least 800 cars are stuck on a hillside trunk road in Japan and other roads nearby after they were hit by the snowstorm, officials said Sunday.

More than 100 flights were grounded Friday and Saturday and several major rail services were disrupted.

The storm is now moving northward and is expected to strengthen by Monday, Japan’s meteorological agency said, warning of heavy snow, blizzards and avalanches as well as high waves in eastern and northern Japan.

National Route 18 that runs through Gunma and Nagano prefectures north of Tokyo is partly closed as hundreds of cars are stuck due to heavy snow, a local official told AFP.

The congestion extends for several kilometres, said the official in the ski resort of Karuizawa in Nagano prefecture.

“We have opened up three community halls nearby for people who were inside the stuck cars, and are now preparing to offer hot meals,” he said.

“Some drivers have run out of gasoline so they need temporary shelter.”

Up to 250 cars are stuck on the road, the Asahi Shimbun reported.

The temperature fell as low as minus 3.6 degrees Celsius on Sunday morning in Karuizawa, with accumulated snow about 90 centimetres deep, the weather agency said.

Congestion extended for 30 kilometres on National Route 4 that runs through the northern prefectures of Fukushima and Miyagi, public broadcaster NHK reported.

The transport ministry has started delivering emergency aid including water and portable toilets to drivers of stuck cars, it said.

Snow began falling on Friday morning in the capital Tokyo and had piled up to 26 centimetres by early Saturday, a week after the heaviest snowfall in decades left 11 people dead and more than 1,200 injured across the nation.

Most snow in the capital had melted thanks to rain late Saturday and sunshine Sunday.
But forecasters predict more snow again in the region around Tokyo later this week. [AFP]