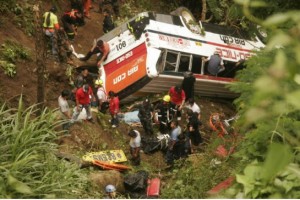 14 people were Friday killed when a tourist bus fell into a deep ravine in the mountainous northern Philippines, authorities said.

The bus plunged about 120 metres while travelling on a narrow road heading to an area famous for its “hanging coffins”, said a report from the civil defence office.

A Canadian man and a Dutch woman were among the 14 passengers killed, it added.

Police said 32 other people on board were injured including another Dutch woman and the bus driver.

The deputy provincial police commander, Ramir Saculles, said disfigured corpses were strewn along the hillside, while some others fell into rice paddies at the bottom of the hill.

A local police spokesman, Davy Vicente Limmong, said the authorities suspect either the driver made a mistake or the bus suffered a mechanical failure, since no other vehicles were involved and the weather was clear.

The bus was heading to Bontoc, a jumping-off point for the rustic town of Sagada which is popular for its hanging coffins embedded on the sides of cliffs, as well as for its scenic atmosphere.

Poorly-maintained buses are the backbone of land transport in the Philippines but they have been involved in frequent accidents, leading to calls for tighter regulations.