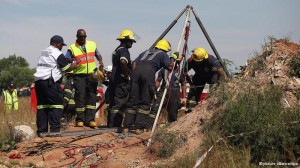 Over 200 workers are feared trapped inside an illegal gold mine in South Africa, emergency rescuers say.

“We have got communication with about 30 trapped miners. They have told us that underneath them there’s 200 others,” Werner Vermaak spokesman of private emergency operators ER24 said.

The opening to an old shaft at the mine outisde Benoni was covered by a large boulder, but the site was too unstable to move it, the South African Press Association reported.

There were however counter-reports later which says only 11 miners were trapped and they have been rescued.

Vermaak told AlJazeera that operations had ceased on the site and the mine had been handed over to mine security. The miners have been taken into police custody.

According to Shain Germaner, a journalist for The Star newspaper, the men were believed to have been trapped since Saturday morning.

The miners were trapped in the “New Kleinfontein 6” ventilation shaft, which had been closed off with concrete slabs, a spokesperson for Gold One, which has prospecting rights to the area said.

“The illegal miners have dug a tunnel right next to it to access the shaft and it has collapsed behind them,” he said, adding that the rain might have triggered the collapse.