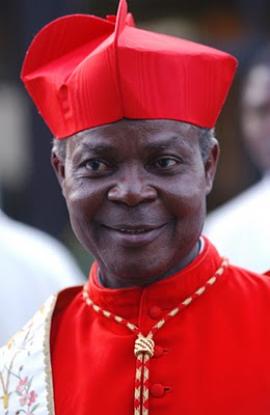 Archbishop Emeritus of Catholic Archdiocese of Lagos, Olubunmi Cardinal Okogie has sounded a strong warning to Nigerian politicians, who are in the habit of looting the nation’s treasury to desist from such unruly behaviour or incur the anger of the people.

In a recent press release made available to journalists, the respected cleric, while joining the human rights community in eulogising the legacies of the late human rights activist, Dr. Beko Ransome-Kuti, regretted that most of the moral principles for which the nation’s past heroes lived and struggled to entrench in our polity, seemed to have been buried with them.

Okogie, who lauded the human rights groups for the peaceful manner they comported themselves during the programmes organised to mark the eighth year remembrance of the late medical doctor-turned rights campaigner, challenged the nation’s leaders to live up to their electoral promises by providing the masses with the necessary social amenities needed to make life worth living.

“How quickly we forget our heroes. It is sad that their legacies seem to be buried with them. This period is another opportunity for our leaders to have a re-think and consider the plights of the oppressed masses.

“We live in a country where over 90 per cent of the citizens are oppressed and homeless. This is why I am calling on our leaders, especially the corrupt ones, who are in the habit of looting the nation’s treasury and manipulating the system for their selfish ends to desist from doing such”, Okogie stated.

He lamented that some of the nation’s political and religious leaders have sold their conscience for the sake of money, even as he observed with dismay that the jostle for political office in 2015 had given rise to unethical oppressive practices by politicians against the poor masses.

“I want to call on all those who have sold their conscience for money to read the handwriting on the wall and repent before it is too late.

“Justice will soon catch up with all the corrupt leaders and their accomplices. There is no hiding place for them, even in the Presidency. Aso Rock is not a hiding place when the hand of justice calls”, he added.

Okogie then called on all Nigerians to storm the heavens with their prayers for peace and justice.

“Let us storm the heavens with our prayers for peace and justice and for peaceful election, come 2015”.