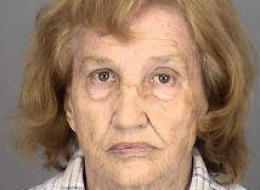 An 81-year-old former middle school teacher is being held without bond until March for allegedly feeding dog food to wild black bears.

Mary Musselman was arrested Wednesdayat her home in Sebring, Fla., where police say she left food out for the animals, WFTS reported.

Officials say they warned the retired gym teacher multiple times throughout November and December to stop feeding the bears, even showing her educational videos about the dangers of leaving food out.

“We are talking about putting out as many as 17 or 18 bowls of dog food,” Gary Morse of the Florida Fish and Wildlife Commission told WFTS.

Morse told NBC News that one bear previously seen on Musselman’s property lost its fear of humans and “was coming right up to people.” Morse says officials had to euthanize the bear because “when we see this type of behavior, the public is threatened.”

Musselman, who said the bears would starve to death if she didn’t feed them, was slapped with two misdemeanors in December, but was arrested again in January. On Jan. 24, officers told her that if she continued feeding bears, they would throw her in jail. On Jan. 29, they did just that.

Musselman allegedly threatened to “shoot and kill” the officers who arrested her. She is also accused of lunging and kicking at the officers, according to Highlands Today. She is now being held without bond until her March court date.

“I think it is outrageous,” Musselman’s former student, Karron Tedder, told WFTS. Tedder and other former students told the station that Musselman is a sweet and harmless animal lover. They said that Musselman should be released from jail because she is the only caregiver for her husband, who suffers from cancer.