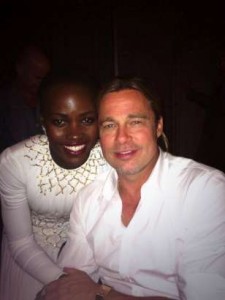 Sexy Hollywood actress — Angelina Jolie has been reported to be jealous of Hollywood newcomer, Lupita Nyong’o whom her hunk husband — Brad Pitt has a crush on.

According to reports from The National Enquirer, who are famous for their false stories; including an exclusive false alarm years ago saying Jennifer Aniston was pregnant. According to them, Brad Pitt has gone completely head over heels for the dark skinned actress.

The report says that the A-list actor was able to hide his deep admiration from his wife for a just a while, but finally came clean when he gushed about the Kenyan beauty at the Producers Guild Awards.

“She’s very special, a very special young lady. We’re going to see great things from her”, he said. After the event Brad reportedly dashed off to meet his family in Australia but Angie wasn’t so happy.

A source reveals to the magazine that Angelina read the riot act when he arrived.
“He wasn’t welcomed with open arms. She told him that he didn’t need to make his ‘crush’ on Lupita so obvious to the entire world. Angie is working her tail off, juggling directing duties and caring for their kids. Meanwhile, Brad is running around on the other side of the globe acting like a carefree bachelor.”

Lupita made quite an impression at the event; a magnificent dress, great composure and was seen hugging, kissing and taking selfies with Hollywood’s finest stars.

She even had a kiss of approval from The Wolf of War Street, Leonardo DiCaprio and Brad Pitt could be spotted cozying next to her all through with a grin on his face. The source concludes by saying

“Brad’s fixation with Lupita isn’t sitting well with Angie. Despite his devotion to her and their children, Angelina can’t let go of the nagging worry that Brad is on the prowl for the next hot thing to come along in Hollywood.”