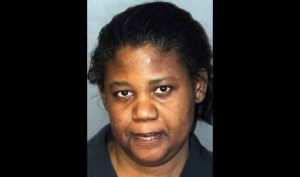 When Marie Lyssa Mars (pictured) reportedly spanked her 5-year-old son in front of patrons at a Brockton, Mass., supermarket, little did she know she’d be arrested and charged with assault and battery with a dangerous weapon on a child under 14, according to The Enterprise.

Police documents state that Mars and her son were shopping at a Shaw’s supermarket Saturday afternoon. Witnesses allege that Mars began spanking her son as she stood on the checkout line and when the onlookers urged her to stop, she continued. Nearly a dozen of the patrons followed the mom and her child to their minivan and noted the vehicle’s license plate number. The customers then summoned police.

Mars drove out of the store’s parking lot but was pulled over by officers moments later. She was arrested at the scene. When the mom was questioned as to why she had struck her child, she reportedly responded that her son “was a very active child,” and that she was just “disciplining him.”

Meanwhile, the boy was turned over to the state Department of Children and Families, the agency that handles cases of child abuse or neglect for a child under the age of 18.

Mars was arraigned and a $5,000 bail was set.  She is scheduled to appear in court to face charges March 3.