Ezea Chukwudi wrote an open letter to popular writer Chimamanda Adichie. In this letter the author reasons about anti-gay law and Chimamanda’s judgments. Read the full text below.

Before I start I would like to ask you to ignore my grammatical errors. I’m not a writer so I have no reputation to protect in terms of grammatical errors. I write principally in response to your article on anti-gay law. I would really plead for your patience to calmly read my own view.

I want you to understand that the Story of Sochukwuma is what you created just to spice up your writing and you didn’t tell us that Sochukwuma wanted to be gay. Nevertheless, I would like to share a similar story. When I was younger, there was a man called Amechi. He had the same nature with Sochukwuma but he has five children now. A friend of mine called Dera has the same nature and he is called ladies man because he has girlfriends and he intends to settle down soon. Obinna has two girlfriends and he’s also currently dating one of the Nollywood actresses. 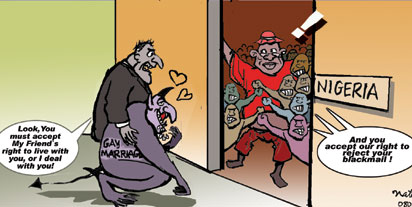 You are an enlightened woman and you should not use your education to spread ignorance, you don’t really have to deceive people into accepting evil in the name of human right. As a woman, I expect you to write what you can defend before God.

You spoke like you are a puppet in the hands of western people, because they support gay, you have to do so but that doesn’t make it right. What is really democracy? Is it really all about protecting the minority as you said even when minority are hell bent in turning Nigeria into Sodom and Gomorah. Is that really democracy? Human right is a Greek gift from satan. What is human right when it is against the Creator? We abuse nature in the name of human right and even legalizing gay is abuse of human right. Should everybody do what they wish to do because human right backs them up? Is there any religion that support it or do your culture support it? Even nature abhors it.

Do you believe in morality? Should human right violate morality? You talked of gay people being different, normal and you still support what is not normal to be legalised. You write to fight against nature and God’s plan for creation.

When you said that passing anti-gay law was an indication of a failed democracy in Nigeria, I laughed because was it not a failed democracy when the western world threatened to withdraw their financial aid to any African country that signs anti-gay law. Does that mean Africa must accept what they impose on us, does that mean we don’t have the right to choose the way we wish to live. You should have supported the African minority rather than Western majority. I think you should show balance in your judgment.

It was laughable when you said homosexual is not a crime because it has no victim. You equally did not answer why prostitution, gambling, illicit use of drugs, suicide are crimes when they have no victim. You equally failed to answer why abortion is legalized even when it has a victim. Amanda, are you a virtuous woman? Would you want your daughter to marry another woman and your son to marry another man? Did you really write with conscience?

Many ignorant people are giving you great ovation after reading your article but God will ask you the blood of the souls that will end up in hell because of what you sent to the public. You compare homosexual with fornication. Between two evils, one is better. Fornication is evil but it is not against nature because it involves two opposite sex, it can have good end product like marriage and child birth but what is the good end product in homosexuality? Anti-nature, anti-humanity, extinction of man kind? Is that your wish for the world? Why are we fighting for natural conservation if not for continuity?

You don’t have to write because you have the right and knowledge to do so but there should be sanctity in what you write. I know you know how to write but your pride should not make you think you know better than your Creator, Leviticus 18:22. If really your opinion about same sex marriage is from your honest heart then the similarity between you and human being is just coincidental. Someone needs morality, see the person in the mirror.