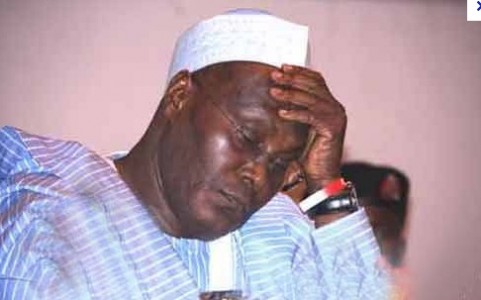 Former Vice President Atiku Abubakar on Tuesday said that he broke down in tears when he got wind of news of the death of dozens of pupils of Federal Government College, Buni Yadi, Gujiba Local Government Area of Yobe State in the hands of gunmen suspected to be Boko Haram.

The former VP noted that efforts being made by the Federal Government and the security agencies in the fight against insurgency in the Northeast appear to be ineffective and wondered if the strategies being used are not mere ‘chasing of shadows’.

The heavily armed assailants were reported to have stormed the school’s hostels in a pre-dawn attack that lasted a few hours, leaving tears, blood and sorrow in their tail.

A statement issued by his media office in Abuja said in part: “All the Federal Government had been doing about addressing the security situation in the North-east region of the country amounts to mere chasing of shadows if school walls cannot be protected from armed attacks.

“This will not be the first time in recent times that school children are being attacked, and it is particularly disheartening that the Federal Government is yet to devise a strategy of keeping our schools safe from terror attacks.

“If our counter-insurgency strategies are not strong enough to keep our children safe inside their schools, then one must wonder if such a strategy isn’t mere chasing of shadows”.

Atiku was said to have been particularly piqued by President Goodluck Jonathan’s statement during his Presidential Media Chat on Monday that the government had been successful at limiting Boko Haram’s attacks to the fringes of the country.

“It is important that the Federal Government upped its counter-insurgency strategy and desist from taking credits in pushing armed attacks to the fringes, as the president would like to put it. No Nigerian’s life is less in value to another”, the former vice president stated.

He added that it was imperative for government to ensure security in schools, particularly federal unity colleges because of what he described as their unique role in forging the bond of national unity among pupils from diverse backgrounds in the country.

Atiku expressed his heartfelt condolences to families of the slain school pupils even as he lamented “that innocent school children have become victims of armed attacks”.