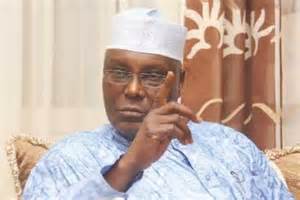 Former Vice President Atiku Abubakar may dump the Peoples Democratic Party, PDP, for the All Progressives Congress, APC before the end of next week, according o indications that emerged yesterday.

The decision to take the action and leave the party which gave him a platform to be Nigeria’s Vice President, was borne out of the frustration and humiliation the PDP has made him go through, just as he has concluded nationwide consultative tours of the six geo- political zones of the country where he brainstormed with stakeholders, leaders and supporters on his next political journey ahead of 2015 Presidential election, Vanguard reports.

A source at his Jabi office told Saturday Vanguard yesterday that Atiku Abubakar has concluded plans to leave PDP for APC, adding, “I am optimistic that he will formally leave PDP for APC next week,”

The 2011 Presidential aspirant on the platform of PDP has in the last two weeks visited associates, stakeholders, leaders, Elders in the South South, South East, South West, North Central, North West and North East geo- political zones of the country where majority of them voted for him leaving PDP for APC.

He had earlier told chieftains of the APC who visited him in a bid to make him join the party that they should give him time to speak to his stakeholders.

Atiku had raised some grievances against the PDP and substantiated his marginalization of not being wanted, even as he stressed that he is a BOT member by right but he is not being called to its meetings and so does not attend, adding that he is a NEC member by right under the constitution, but he has been barred from its meetings because invitations are not given to him.

He also complained that by the norms of the party, he is entitled to being invited to its PDP caucus and said that Dr. Alex Ekwueme, a former Vice President gets those invitations, but he gets none of those, adding that he is not considered as a major stakeholder in taking decisions affecting the Adamawa State Chapter of the party.

Atiku had said last week that, “there is a sustained effort by the party managers and government to entrench impunity and not to open up the party for democratic competition. Above all these, it is clear by now that the Governors who have remained in the party have given Dr. Jonathan an automatic ticket.”

The former Presidential candidate of Action Congress, ACN said last week that as a member of a party that changed to Action Congress of Nigeria, ACN, and formed a coalition called APC, he will not be a new person in APC as that is a familiar terrain if he finally joins them because his friends are mostly there and as a party, it offers what he described as a real chance for change and reform in the country.

In a statement he issued last week and titled, “The Challenges of a Decision,” the former Presidential aspirant on the platform of PDP noted that he has begun consultation tour of Nigeria, Dubai and London, even as he said that there was what he termed a sustained effort by the party managers and government to entrench impunity and its lack of preparedness to open up the party for democratic competition, adding that his decision to defect to APC may be borne out of the fact that Governors elected on the platform of PDP have already given an automatic ticket to President Goodluck Jonathan for his re- election bid.

Meanwhile, a statement from his office to Saturday Vanguard yesterday said that the former Vice President yesterday concluded his nationwide consultative meeting with that of the North-East geo-political zone in Bauchi. [Vanguard]