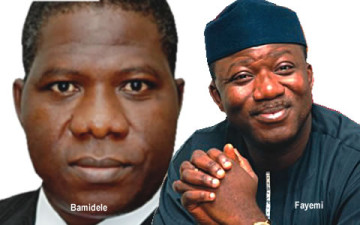 A member of the House of Representatives and governorship aspirant of Labour Party (LP) in Ekiti State, Hon Michael Opeyemi Bamidele, has accused Governor Kayode Fayemi and the state chapter of All Progressives Congress of flouting the order of the Independent National Electoral Commission (INEC) on the erection of billboards and pasting of posters ahead of June 21 governorship election in the state.

The INEC chairman, Prof Attahiru Jega, had during a recent election stakeholders’ meeting in Ado Ekiti, the state capital, reminded politicians and political parties on the need to comply with the Electoral Act, 2012 (as amended) by removing their pasted billboards and posters on the grounds.

But Bamidele, a front liner for the governorship ticket of LP in Ado-Ekiti at the weekend, wondered why the governor and the APC are being treated as sacred cows when his party had since complied with INEC’s directive.

Bamidele said: “We have kept to INEC’s directive to stop erection of billboards and pasting of posters. We have removed all our billboards and posters on the streets but we are surprised that the governor’s posters and billboards are all over the place and nobody is talking about it”.

When contacted, the state APC’s director of publicity, Mr Segun Dipe, said the electoral umpire was specific about the kind of posters and billboards that should be removed and those are the ones asking for votes before the official date for the commencement of campaigns.

Dipe said the billboards of Ekiti State government that the federal lawmaker was referring to are those advertising the achievements of the Fayemi administration.

“Let it be on record that Fayemi or his campaign organisation has not put out any campaign poster because the governor is law-abiding and understands the provisions of the Electoral Act clearly. The governor has also warned that no one should put up posters in his name until campaign begins. By the time campaign begins, you’ll see our posters and you’ll see the difference.

“Hon Opeyemi Bamidele should quit all these attention-seeking cries of a baby and face the June 21 election if he is really serious about contesting. Lies and fabrications will not win this election. Only good works and good manifestos will. In both, Dr Fayemi has shown what he can do and Ekiti people now know that what they had been told was impossible is actually possible as Governor Fayemi has through his many achievements demystified those impossibilities”, Dipe stated.